Anchin, a premier New York City-based accounting and advisory firm, has just completed a very successful social media contest, seeing their engagement among firm members double. It's no secret that competition leads to interest and activity and when it comes to leading a successful employee advocacy campaign; interest and activity are the two biggest indicators of success.

For this three-month competition, Anchin leadership encouraged their members to participate. Users of the software found (or were reminded) how easy it was to use, scheduling out a week's worth of content with a click of a button using the Clearview Social software.

The contest was a hit; an exponential amount of new users participated. Success metrics were measured throughout the contest, utilizing Clearview's in-depth Analytics page.

But let's take a deeper look at this. It's easy to say, "let's do a contest," but Anchin took it to the next level, setting precise goals and awards.

First off was the individual award. This was given to the top 3 sharers on the platform over the course of three months. Following that was a group award for the group that had the most shares and participation. 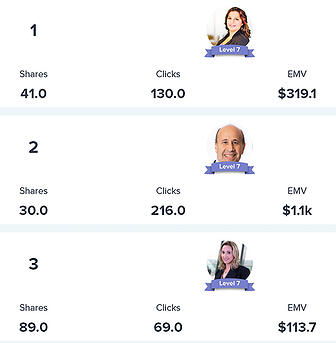 The final award was given to the group with the most improvement on the platform, in terms of clicks. In addition to the analytics page, success was able to be tracked via the comprehensive Leaderboard feature on the Results page.

Having these different types of awards allowed Anchin to reward different healthy sharing habits. A member of Anchin's brilliant marketing team stated that they hoped continued contests like these could bring in more sustainable sharers and users that will utilize Clearview Social.

If you think that a contest, such as Anchin's, could help your team, contact your Client Success Manager and they can give you some tips on how to get started. If you've never used Clearview Social and would like to see how easy it makes it to run competitions, request a demo today.