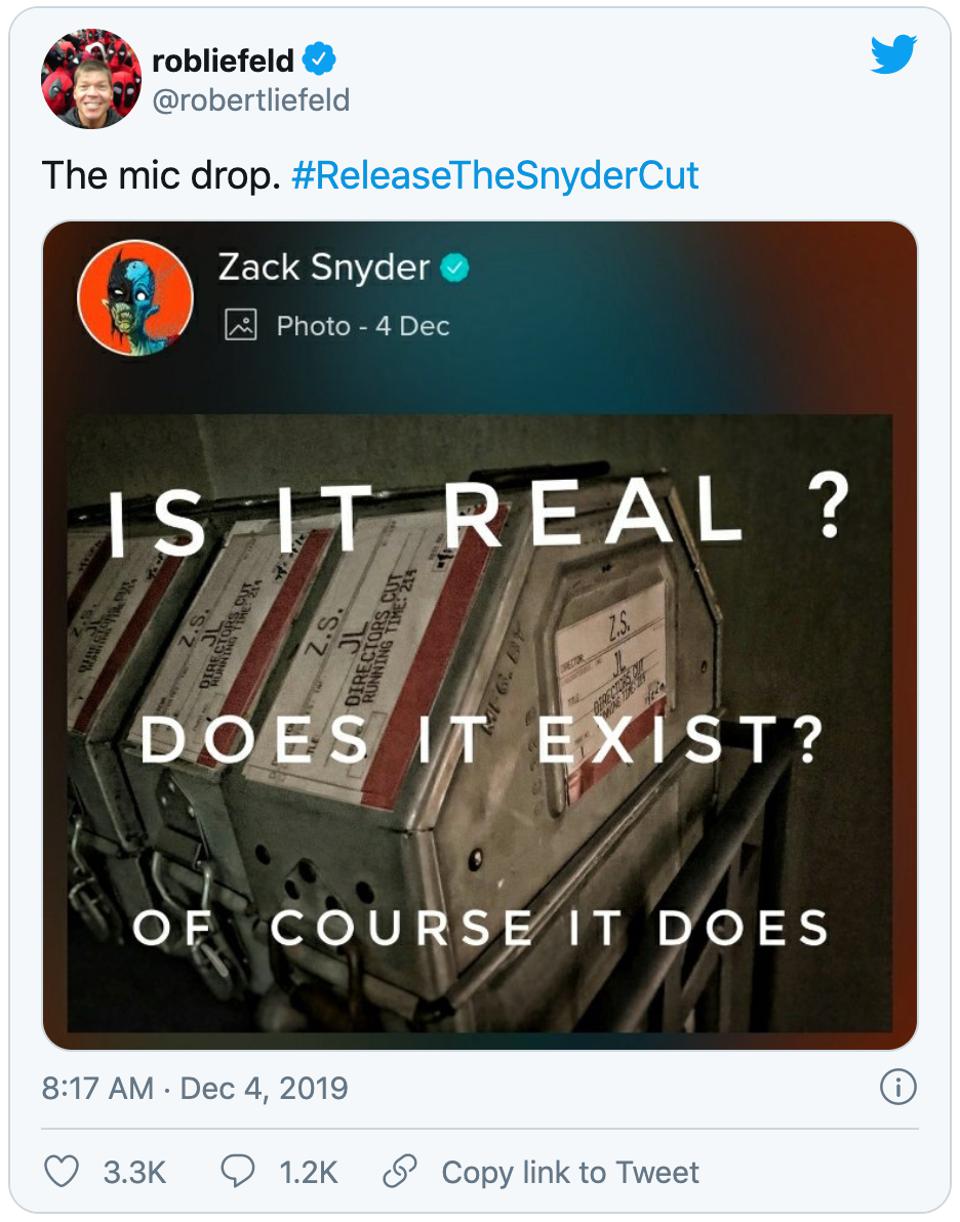 I like super heroes as much as the next guy; let’s be real, there’s nothing better than two people flying around and shooting each other with lasers in the sky. Over the past twenty years, it’s been super fun to watch these films grow from Arnold Schwarzenegger making ice puns to Black Panther getting an Oscar nomination for Best Picture.

As these films have grown, so have the fan bases, which has resulted in one of the biggest movements that have ever swept Twitter: #releasethesnydercut.

That hashtag refers to the infamous Justice League (2017). The filming of Justice League was fraught with problems; Director Zack Snyder, who had directed two of the previous films, Man of Steel and Batman v. Superman, left the project in May of 2017, due to a family tragedy. Warner Brothers soon replaced him with Joss Whedon, who took over for reshoots and post production.

Soon after Joss Whedon took over the directing chair, Junkie XL, the original composer, was replaced by Danny Elfman. Soon after this change, the production went through numerous reshoots. About this time, the fans started to wake up on Twitter, expressing a deep worry about a diversion of vision on the project.

When the film was finally released in November of 2017, it was met with mixed reviews and only earned $229 mil in the US on a $300 mil budget. Only weeks after the release, whispers began.

Fans began talking on Twitter about the coveted “Snyder Cut.” Supposedly, Snyder had finished filming, but Warner Brothers hadn’t liked the project and fired him. Thus, #releasethesnydercut was born.

On every Warner Brothers social media post, on everything shared by anyone on the cast, the comments section would be flooded with #releasethesnydercut.

These fans had turned Twitter and this hashtag into a megaphone for them to talk directly to the artists. Their voices were being heard and they couldn’t be quieted.

I call it ‘the Shotgun Strategy;’ these fans were getting the word out to whomever they could. Scattered, but strong. And what’s more, it was the voice of a cult following that grew to a fever pitch for three years. For three solid years, someone was talking about it.

In August 2019, even the stars of the film joined in, with Jason Mamoa, who played Aquaman, put up an Instagram video saying that he had seen the Snyder Cut and it was ‘sick.’ Mamoa was soon followed by his co-stars, Ben Affleck, Ray Fisher, and Gal Gadot in November, who all made various tweets using the fan’s #releasethesnyder cut.

They had changed a social media post into a full-blown movement, but Warner Brothers still wouldn’t budge. Snyder continued to encourage and support his fans by posting images that weren’t included in the original cut of the film on his Vero account.

But finally, after three years of campaigning on Twitter, in May of 2020, Warner Brothers announced that they would finally release Zack Snyder’s Justice League on HBO Max. The celebration from the fans caused #releasethesnydercut to trend on Twitter for three whole days.

Feeling heard on Twitter isn’t always the easiest thing. With nearly 500 million tweets per day, getting lost in a sea of cat puns and arguments is real possibility, but if #releasethesnydercut can teach us anything, it’s that a few people with real passion can get any message out on Twitter.

One great strategy I’ve found that can help you get the word out on Twitter is to chat with a couple of friends (also known as Twitter allies) beforehand and already have them on standby to retweet you. Those retweets and shares are a powerful thing; they get more eyeballs on a post or a hashtag, increasing awareness in an exponential way that’ll be more than you expect. You can also think of this as a way to prime the pump for potential virality.

In full disclosure, I haven’t sat down to watch the Snyder Cut yet, I mean it clocks in at almost four hours. That being said, the initial reviews on it have been good, especially compared to the reviews of the original cut. If you love superhero movies, though, at the very least, #releasethesnydercut earned you another couple more hours of footage. That’s the power of Twitter.